Online gambling and betting in US during lockdown 2022
Industry News

How Covid-19 has affected the NBA and NHL

The playoffs seemed like a dream too good to be true during the start of the pandemic when Covid-19 hit the world by storm. But not to make all happiness in every sports lover's day disappear and to waste a whole season with hundreds of regular games the NHL and NBA declared to play with restrictions. The season was shortened and continued almost directly to the playoffs after some regular games. The players and teams that advanced to the playoffs had to be quarantined and weren't allowed to leave the bubble. The bubble where the NBA was declared to play was held at ESPN Wide World of Sports Complex in Bay Lake, Florida. Likewise, the NHL was held at Rogers Place in Edmonton, Canada, and Scotiabank Arena in Toronto, Canada.

How are NBA & NHL players affected by the lockdown?

Do the players perform better when there is no audience or do they play worse without their home audience?

How has COVID affected the odds wagered at online casinos? Is it more or less profitable to bet on the home/away team?

The bubble was a community made for players, coaches, and people that were needed to complete the playoffs. A place to be inside doing practical stuff, socializing, training, and attending games. Not to feel too isolated they had everyday facilities, restaurants, and shops just for the locked-up people. The meaning was that everyone that was allowed in the bubble had been quarantined and was 100% negative, from the Covid 19 virus. So, the pandemic could never affect the playoffs. But it was certain it was going to be tough to be away from normal life. The players knew it from the beginning when stepping inside the bubble. Even Edmonton Oilers goalie Mike Smith stated that:

It’s all kind of new to everyone. I think the team with the strongest mental strength is probably going to lift the Stanley Cup this year.”

The two teams Tampa Bay Lightnings and Dallas Stars that were playing in the Stanley Cup finals were more than 60 days inside the bubble. Two months apart from normal life is a challenge that the human mind and body need to adapt to. To stay sharp and healthy you need to follow a routine and also do some checkups, physically and mentally.

This article is written with the objective to understand how the coronavirus affected the NHL and NBA during the pandemic. It was unclear how the players, coaches, and audience would be affected mentally and physically. We settled out with the objective to understand how the industry reacted, both by analyzing raw numbers but also by trying to understand the human aspects of the situation. By collecting raw statistical data and analyzing tweets and interviews from players and coaches we are able to paint a blurred picture of how the pandemic has affected the whole industry.

The investigation began with collecting all the available statistics e.g., game results, odds, sides, and dates resulting in more than 600 rows of data to analyze. The data range from the NHL and NBA playoff seasons 18/19-19/20, which covers a total of 328 games. 164 games were played with the audience, resulting in a total of 3.151.329 supporters during the 18/19 seasons in NBA and NHL.

The numbers speak for themselves and more than 3 million people were missing the live games in season 19/20, where a total of 0 supporters sadly could not attend the 164 games. Table 1 - Supporters during season 18/19 in NHL and NBA

The actual game data is only one side of the coin. In order to see the whole picture, one needs to understand how the players actually feel, when playing on empty fields without roaring fans and an intense atmosphere. A study released from Stanford University and Strava (an online social exercise platform), showed that 1 in 5 athletes reported difficulty exercising related to mental health and motivation. Furthermore, did the study reveal that before COVID-19 restrictions, 3.9% of athletes reported feeling down or depressed more than half the days in a week compared to 22.5% during COVID-19 restrictions, a stunning 5.8X increase.

The numbers above correlate with what the players themselves express, e.g. did the LA Clippers forward, Paul George, tell about his mental health problems, saying he felt trapped and isolated in the bubble.

“I underestimated mental health,” George said. “I had anxiety. A little bit of depression. Us being locked in here. Whether I was the first to say it or not, we’re all dealing with it.”

It is obvious that the pandemic has taken a mental health toll on both professional athletes and amateur athletes as well, but the numbers are startling given that regular exercise is scientifically proven to help mitigate mental health problems like anxiety and depression.

Megan Roche, a clinical researcher at Stanford and a lead author on the study also commented on their findings:

It is unforeseen consequences that the pandemic brings along and there is a clear connection between the mental health of players and their abilities on the field. Playing without home advantage or any audience at all could have a major impact on the games and end scores that we have seen. One might argue that the players could have a slight edge not be under stress and pressure. Some were missing their families and loved ones which could have had a negative effect on the field. Despite all the negative impact, COVID-19 had on the players and the coaches, there is still some positive feedback. E.g. did Vegas Golden Knights coach Pete DeBoer state that

“Even on the worst day in here, there's all the hockey you can watch and all the beer you can drink, so it's not a bad day.”

The NHL coach emphasized that there are still positive moments during the lockdown and that the bubble has a place for fun and entertainment as well. Furthermore, is it interesting to see how players of different ages are affected by the bubble. There is a big difference in lifestyles and routines, players who are at the end of their career have other needs than players who have just started their career. E.g. a 20-year-old versus a 38-year-old player would definitely have different needs and thereby be affected differently by the bubble.

3.3 Playoffs statistics from the NBA & NHL 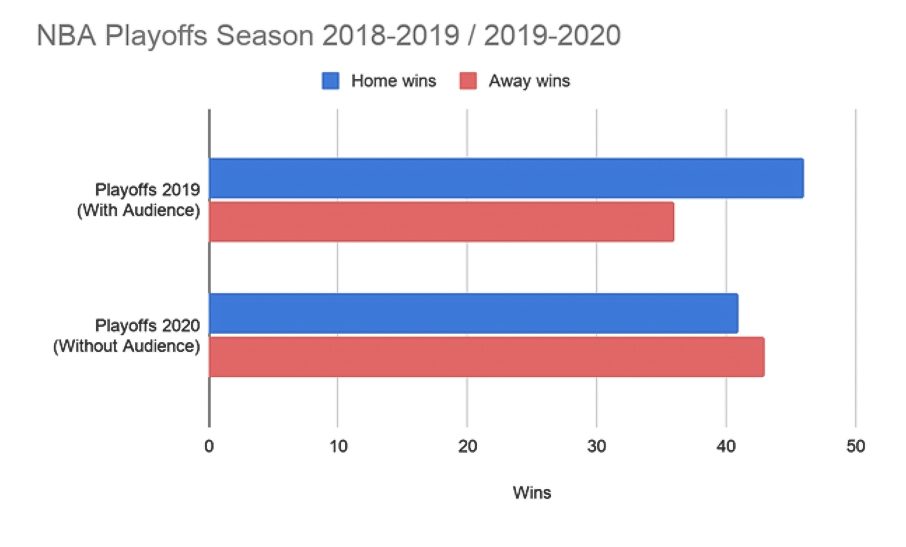 As seen above in table 2 the NBA playoffs had a big difference in performance during the two seasons. The biggest change seen among the data we collected was between the normally played playoffs in 2019 and the lockdown playoffs in 2020, emphasizing the stats of home wins. In 2019 the NBA played a total of 82 playoff games and in 2020 they played a total of 84 playoff games. With a percentage of 56.09% in 2019 of winning home dropping down to 48.8% in 2020, shows that without the audience and no home advantage on the court the players can perform equally. 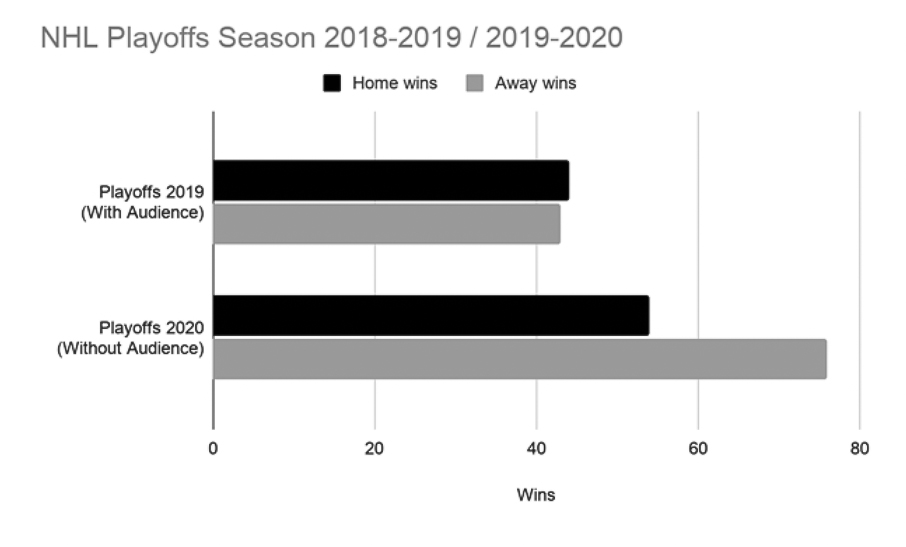 As visualized intable 3the NHL playoffs played more games in the 2020 playoffs, because of skipping out on the regular games and going directly to the 1/16 finals.The data shows that the away win percentage was a lot higher, with a stunning58.46%.With the audience in 2019, the playoff-games winning percentages were 50.57% (home) and 49.43% (away).

As we can see in the two tables both NBA and NHL away wins have risen during the pandemic, this fluctuation in the data shows how much the teams were affected by not having an audience and pressure during their games.

3.4 Odds Statistics from the NBA & NHL

Chance Assessment shows that the 'away games' have been given too high odds when 46% of the games end up with away victory, which should, in reality, be 36% according to the avg odds.

Chance Assessment shows that the 'away games' have been given too high odds when 39% of the games end up with away victory, which should, in reality, be 32% according to the avg odds.

Chance Assessment shows that the 'away games' have been given too high odds when 51% of the games end up with away victory, which should, in reality, be 47% according to the avg odds.

Chance Assessment shows that the 'away games' have been given too high odds when 43% of the games end up with away victory, which should, in reality, be 36% according to the avg odds.

The bookmakers have not taken the effects of the pandemic into consideration when calculating the odds for away games. All NBA and NHL away games have been given too high odds. This means that it has been more profitable to bet on the away team winning during the lockdown, without an audience.

Explanation of whether COVID's effect on the odds has made it more or less profitable to bet on the home/away team – and maybe that also being mentioned in the conclusion.

Comparing the betting statistics of the 217 NHL games and 166 NBA games, we found out the following about the no audience pressure and mental feelings that could possibly affect the odds:

As mentioned in the introduction the objective of this article was to answer the following questions:

It is not a surprise that the lockdown has affected all players and some more than others. The interviews that the players have given, tell that it is hard to be separated from their families and that some days are really hard. The quarantine/bubble was new untrodden territory for the players and it has surely affected their games on the field.

The second question about the player’s performance during lockdown did need a statistical analysis to answer. What became evident was that during the lockdown all NBA and NHL away winning percentages went up. This radical shift in away wins tells something about that without an audience it was not an advantage to be the home team, because the home team had no audience to cheer them up or patronize the away team. This ultimately tells something about how important a role the audience plays during a match and furthermore how much their appearance can affect both home and away teams. These findings are not sensational but they emphasize the importance of each element in a sports game - if you remove one element it will affect another, which can create the domino effect.

The answer to the third question is based on raw statistical data. What we discovered is not surprising as it would be expected that the odds would be affected by the pandemic. The question is how the odds were affected and if there were any trends towards more or less profitable bets. The winning percentage of the away team went up by approximately 10% during the pandemic in both NHL and NBA.

Practically this means that if you made a bet on the away team you had a bigger chance of winning and doubling your money. Likewise, the average home odds increased in both NBA and NHL. Meaning it was more of an even chance than usually betting on the home team to play safe for a win.

The forecast for the pre-game away odds were too high, as the away team had no disadvantage by playing on away court with the opponent audience. We went through the odds with a refund and chance assessment calculator that gave proof of the odds being too high.

With these three answers, we can conclude that Covid did affect numerous elements in the NBA and NHL. Mentally and physically the games changed and people working within the industry had to adjust their everyday life. This ultimately proves that we are all just humans and that we have to cooperate to get through tough times.

Previous Back to overview Next